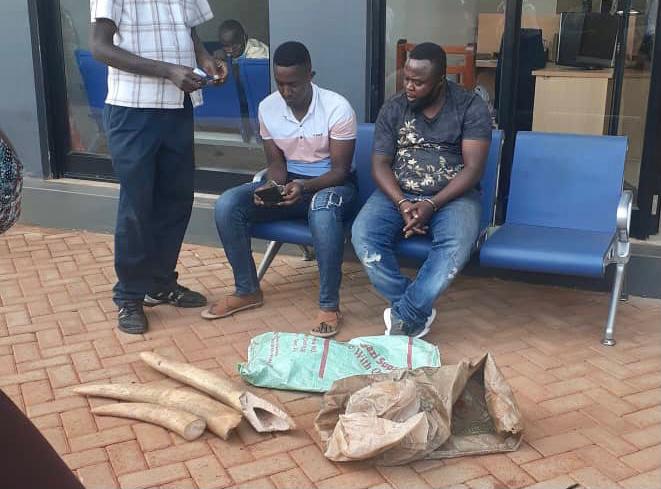 Two traffickers, one of them a pastor, were arrested in possession of 14kgs of Ivory while trying to sell it. They where intercepted by URA customs officials in cooperation with EAGLE Uganda and whisked away to answer  to charges against wildlife protected species.

The pastor, serving to a church in the city center has been in the illicit trade for more than 3 years. The second member of the criminal ring was a church member, they both are Rwandese nationals. They belong to a network of ivory traffickers in the country. They are connected to other network involved in gold and human skulls trafficking.

They transported the ivory concealed in a brown sugar sack and placed in the trunk of their car. One of them drove the car to the place of transaction and on arrival the second moved the sack from the trunk and was immediately arrested. He resisted but was quickly closed down and handcuffed. The bag contained freshly marked ivory tusks weighing 14kg. The base of one of the tusks was cut off using a hand saw.

Both suspects will face trial and be charged with wildlife crimes for dealing in illegal animal parts, They could face up to 9 months in jail if convicted.

Authorities from the URA Customs worked with support of EAGLE Uganda – an organization developed to enforce the law against the trafficking of protected species.

Elephants are one of the most iconic and endangered animals of Africa. Tens of thousands are massacred every year. The illegal trade in ivory and some elephant parts has been described as the main threat to the survival of the elephant species on the continent. Uganda is still considered to be one of the trafficking hubs for illegal ivory trade, connecting the central part of the Congo basin with ports in Kenya as well as international markets via air transport.

The LAW in Uganda against poaching and trafficking of endangered species is still weak, longer terms of sentence and abolition of bail for such offenders would be the best message to the world out there.